"89-91 Market Street is a nine story, two bay, rectangular plan, classicizing, commercial building, constructed in 1913. The seven story body of the building is articulated by brick piers that both divide the building into bays and visually support its seventh story bracketed cornice. Channeled pilasters separate the windows of the two story attic. The strongly projecting, white glazed terra cotta entablature features a cartouche and scroll supported cornice, as well as roofline acroteria. Although much of the original facade remains, the first two stories of the building have been somewhat altered, and the paired window groups have been infield with inappropriate fenestration." 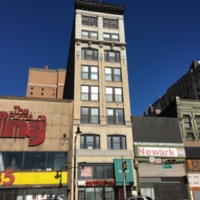