Cathedral of the Sacred Heart

This church is the seat of the Roman Catholic Archdiocese of Newark and the fifth largest cathedral in North America.

Cathedral of Sacred Heart was initially commissioned to address a high demand for a Catholic church by the massive first wave of immigrants (1830's to 1850's) that mainly consisted of Irish and Germans, majority of which was Catholic. After decades of suppression by Protestant Americans, Catholic Church hierarchy appointed the pope, who served New York city, to be the Diocese of Newark's first bishop. With the violence towards the Catholics still taking place, Bailey felt that every day showed how much the Newark area needs a real Catholic Cathedral and a Bishop's House for the Diocese. While the choice of land has taken place, the architectural style was immediately decided. The epoch, highly influenced by the Englishman Augustus Pugin, favored his vision of Gothic revival.
With the guarded interests emerging, considerations of selling the lot for the church were taking place. The overall concerns were that there was not enough Catholics to serve in the area, so a small church designed by Jeremiah O'Rourke was built around 1890 at the site intended for Sacred Heart Cathedral in order to test the utility of the location. Operating under the same name, which was neutral enough to not emphasize a special importance of any country's saints, it united all immigrant Catholics under one roof. Although Jeremiah O'Rourke travelled to England with the Monsignor Doane and was the one to suggest the purchase of the current site, there was a competition held for the design of the cathedral. Once O'Rourke succeeded with getting the commission, he immediately offered diocese a discounted commission fee of 3.5 percent (30 percent lower than standard at the time), calling it "labor of love and not of profits".
Jeremiah O'Rourke's design concept was overall referred to as 'continental Gothic of the thirteenth century'. The cathedral had the hints of Gothic masterpieces like Rheims, Amiens and Notre Dame cathedrals, and yet referenced Pugin's views of Gothic revival. Architect's construction plans used limited amounts of steel ( which was superseding iron in the end of nineteenth century ), which was directed to be applied in the flooring and throughout the roof. Therefore, the cathedral was a masonry structure - a signature construction method of O'Rourke throughout his practice. The cathedral design also included two towers, "Gesu", a strong statement of dignity, and "Blessed Virgin Mary", more elegant and graceful character. During the time of construction the race for the tallest structure in the city was continuing, and the tallest building yet was standing at 12 stories high. Upon completion, the Cathedral of Sacred Heart's spears were dominating the skyline of Newark with the highest point of about 35-story building.
In 1910,O'Rourke was replaced by Isaac Ditmars because of concerns over the structural integrity of O'Rourke's designs. Ditmars modified the original design to reflect a French Gothic model. It wasn't until 1954 that the cathedral was completed by Paul C. Reilly.
This cathedral is the fifth largest in North America, with second largest rose window in United States. Side chapels are build to honor the ethnic groups who financed this cathedral: Germans, Irish, Eastern Europeans, Italians, and Asians with Latin Americans. 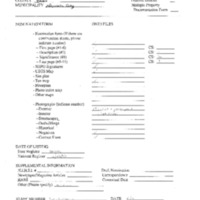 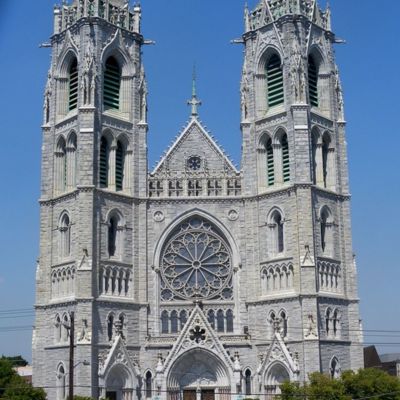