Newark is at a crossroads in its history. Like so many other former industrial cities, Newark spent the second half of the last century in economic decline, as business and residents left for the suburbs. The city’s woes were compounded by its own unique issues, with the scars of the 1967 riots and a generation of corruption impeding progress. But Newark benefits from tremendous competitive advantages that other older cities around the country lack due to its proximity to New York City, at the center of a rapidly growing region desperate for development sites. Unlike much of the region, the city already has the infrastructure and physical capacity to support the growth that can bring prosperity to all of its residents. Mayor Cory A. Booker was elected on a platform of change, bringing in a dynamic new City Council. Along with efforts to make the city safer and improve public schools, Mayor Booker has promised to create a vision for Newark during his first 100 days in office that projects where the city needs to move over the course of his administration and beyond. How many people will live and work in Newark? What kinds of neighborhoods will the city have? How will people travel around the city, and where will they spend their free time. Although the city has benefited in recent years from some important new development projects and there have been significant efforts in many neighborhoods to draft plans for development, Mayor Booker recognized the desperate need for a city-wide vision for the future. The City has recently updated the Land Use Element of its Master Plan, but it now needs to update the other elements in anticipation of a new Master Plan and updated Zoning Ordinance. The current Zoning Ordinance is over 40 years old, and has not kept up with a generation of development. Instead, local community groups, state agencies, private developers and others have filled in the void by creating their own plans on a piecemeal basis. While many of these plans are beneficial, they do not fit into a larger, unified picture. More troubling, citizens understand that overall development policy decisions have been made as much on the basis of political connections as merits. Land use decisions in Newark have typically not been made with constructive engagement of the neighborhoods. As a result, residents have felt disenfranchised and public leaders report a “planning fatigue” that must be recognized and addressed to ensure that the best ideas are adopted and implemented. In June, Mayor Booker enlisted Regional Plan Association (RPA) to create a Draft Vision that would build on the many existing plans for the city and provide the foundation for the revised Master Plan and Zoning Ordinance. RPA’s staff of planners began by analyzing more than 100 plans prepared by community groups, previous City administrations, State and Federal agencies and non-profit organizations. The effort focused on 89 of the most current plans, including 9 open space and environmental plans, 29 community-level plans, 36 economic development plans and 15 transportation plans. A full list and map of these plans can be found at the back of this report.

The use of this document may be subject to the copyright law of the United States (Title 17, United States Code) or to site license or other rights management terms and conditions. The person using the document is liable for any infringement. 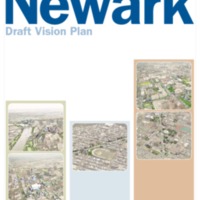