This project goal was to review Newark streets through time and to experiment with digital timelines and storytelling through the NJIT DANA database.

In this digital exhibition, you will find an interactive map and timeline, with a collection of images and videos of Newark streets since the early 20th century until the last decade. You can explore by simply pressing the interactive points and objects on the map, or you can explore the timeline to identify particular objects. All items are connected to NJIT's DANA database.

This digital exhibit is a small fragment of the story that is Newark history and development. 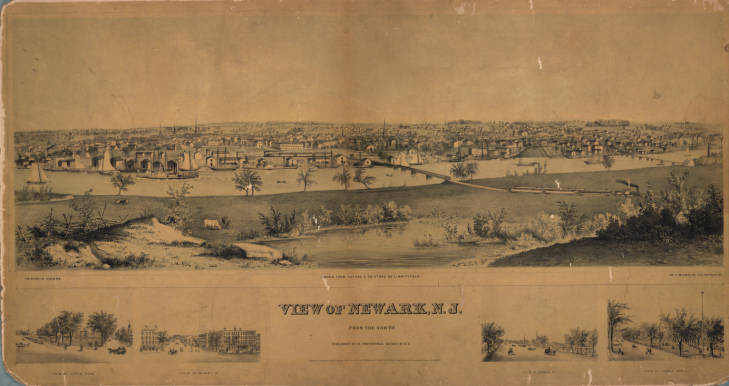 Newark is a city with a rich and diverse history in the arts, industry, civil rights, and commercial development. Located across the river from New York City, Newark was an urban laboratory for innovations, a vibrant commercial center, and the landscape of African American struggles for equity and equality (Tuttle 2009).

Newark's story is similar to many American cities, it was established in 1666 by a faction of Puritans from south of New Haven, Connecticut; and rose to industrial and commercial fame by the 19th century. The Great Depression, white flight from urban centers, and urban renewal practices changed the face of Newark from the 1950s onwards. The 90s, in particular, were a notorious period for Newark, known as one of the country's most dangerous cities. Continues efforts by local communities and elected officials saw Newark's population rise in 2000, for the first time since the 1930s and its continued place as a regional industrial center (Cunningham 1988, Mumford 2007). 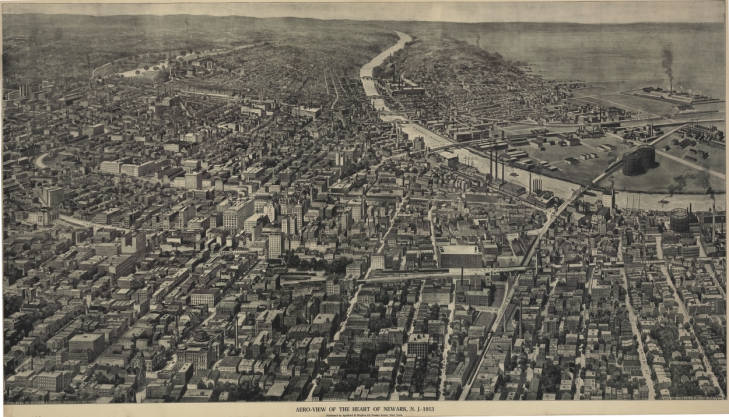 In the last five years, new housing and commercial developments are being built around the city, murmurs of gentrification, people on bicycles, scooters, and pedestrians are more common, and everyone seems to feel like it is Newark's moment to shine. For those familiar with Newark, this isn't the first time such a sentiment is felt.

Newark, like many American cities, is a city for cars. Lanes are wide, crosswalks are few, and the vehicle and its driver are always the priority. It is a city like many other American cities designed around the private car and the prioritizing of parking facilities. Around early 2000s Newark downtown, 'Four Corner' at Market and Broad Street and around Military Park, had more than eight different surface parking lots in the size of full street blocks (see on the timeline,2004, Military Park historic district boundaries). 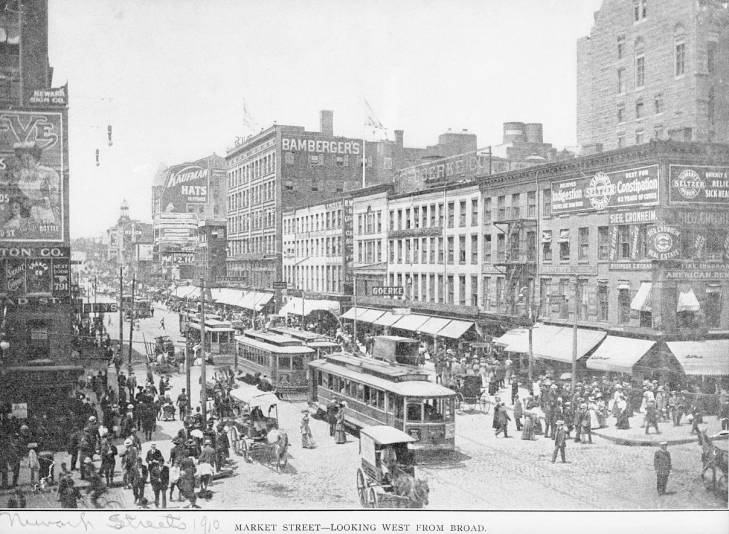 Large institutes in Newark, like NJIT, Rutgers and UMDNJ were developed and expanded during the 1950s and 1960s, in most cases under the development programs of urban renewal and using red-lining practices (Rothstein 2018). Additionally, several highways and interchanges developments, including I-280 resulted in several communities uprooting and the disappearance of some Newark neighborhoods and streets. In time public housing projects were constructed around Newark such as Christopher Columbus Homes, Baxter Terrace, and others (see in the timeline, the Newark Redevelopment, and Housing Authority 1974 Annual Report). In the early 1990s, many of them were torn down, 40 out of its 46 housing towers were demolished due to deterioration and unlivable conditions (Levy 1994).

Newark's Broad and Market Streets, also known as the "four-corners" has been the center of Newark downtown since its establishment in 1666. Through the early 20th century, the Newark and New York Railroad has stations in the area (Tuttle 2009). The very first skyscrapers in Newark were built in around four-corners (see on the timeline The Firemen's Insurance Company, also at the southeast corner of Military park on the map). The roads had an extensive trolly system which was shared with private horse-drawn carriage, horse-drawn buses, pedestrians, and the occasional private combustion engine vehicle. Images from the time show us busy streets in which pedestrians are free to walk between driving traffic, and the curbside is rarely used by parking carriages or early automobiles (Turner and Koles 1997, Turner, Koles, et al. 2003).

By the late 1920s, the private combustion engine car was becoming affordable, and streets were filled with Model Ts. A video taken between 1926-1927 in Newark shows a changing roadway; roads that used to be shared have become throughway for faster moving cars. Privately owned parked cars line the curb, and pedestrians have been made to cross in designated places only (crosswalks). At the time, there was no system of traffic lights or traffic road marking (see sightseeing in Newark Part 1&2 on the timeline in 1926). 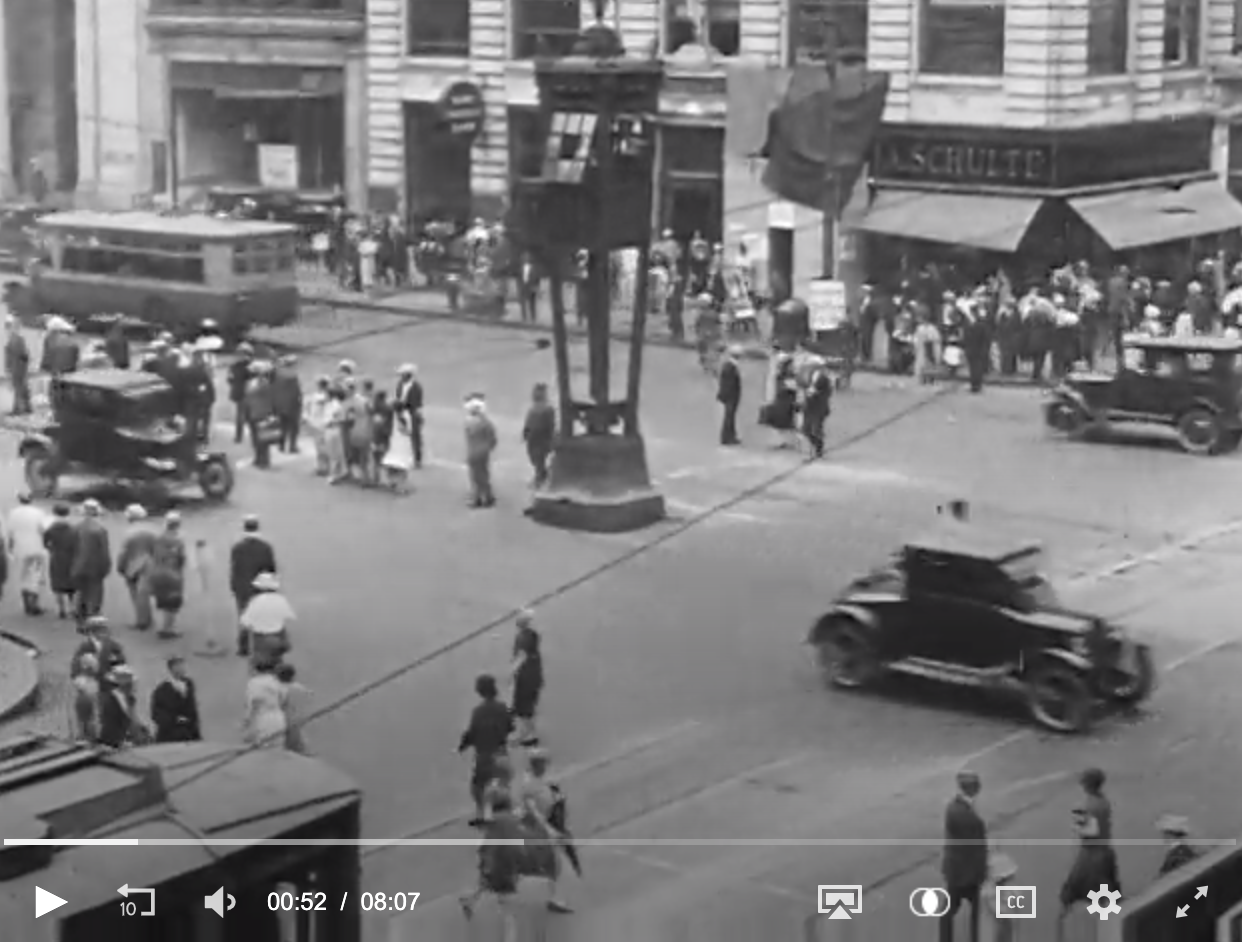 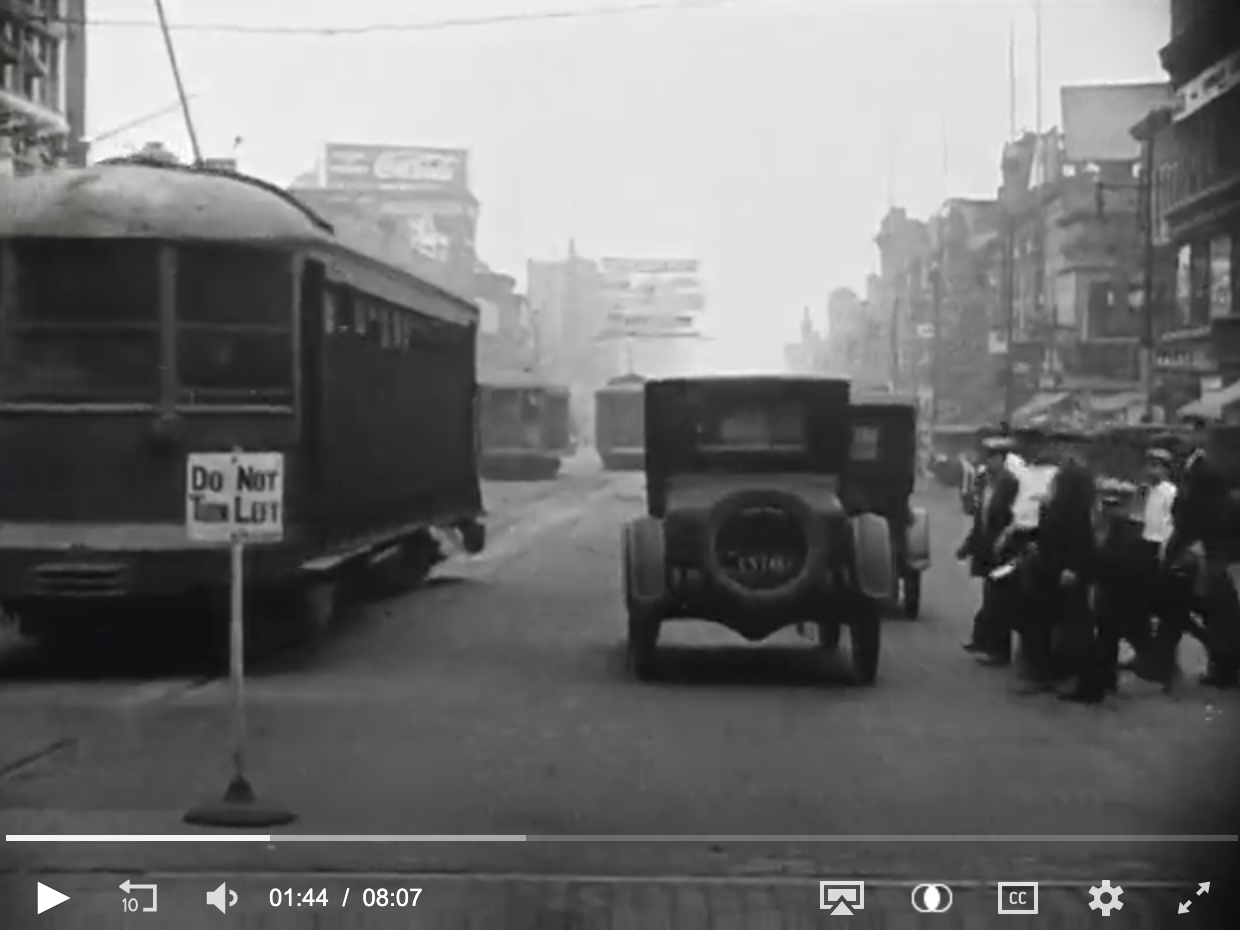 By the 1940s and 1950s Market and Broad streets trolly system have been removed and the roadway repaved with asphalt. Parking meters and privately owned private cars line the sidewalks, and the streets are a little emptier pedestrians wise. Roadways now have road marking, and several intersections have traffic lights, most roadways are several lanes wide, and pedestrian crossing is strictly forbidden outside of a crosswalk. The term jaywalking, invented by automobiles manufacturers in the 1930s encourages cities like Newark to mount physical barriers to prevent people from crossings. Several sidewalks around Military Park have rope barriers to prevent people from crossing outside of designated crosswalks (See the Greater Newark Chambers of Commerce document, 1975 on the timeline). 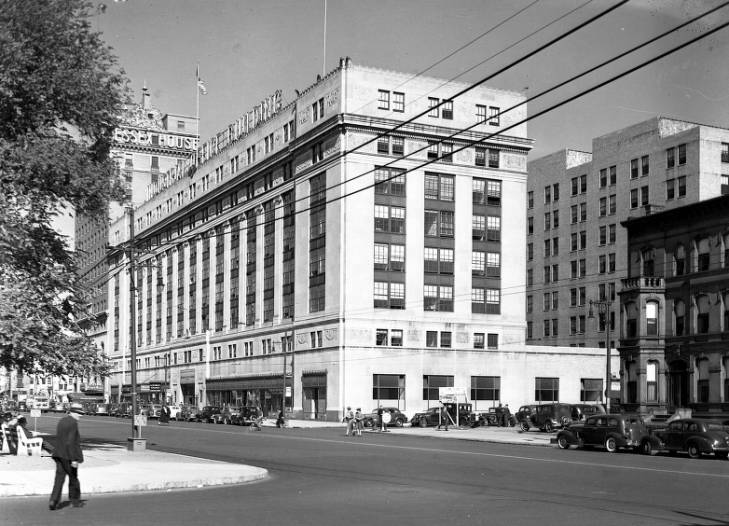 The 1960s and 1970s are years of construction and development around Newark, the Gateway Center near Newark Penn Station takes shape. Multiple 'tower-in-the-park' projects have been built around the city, tall buildings surrounded by flat grass or surface parking lots. When the Gateway center was completed in 1971, the city firmly believed in the power of urban renewable and modernist architectural standards. The center was developed with a series of bridges to allow those coming to Newark to not actually spend any time on Newark Streets.

By the early 2000s, most of Broad and Market Street between Penn Station and Military Park built urban form was surface parking lots. In the last several years' multiple lots across Newark downtown have been redeveloped.  The Teachers Village, designed by the Richard Meier Office, was completed in 2018. Hotel Indigo Newark Downtown reopened after extensive renovations on the corner of Market and Broad Street in 2014, around Prudential Center, which opened in 2007, multiple restaurants and bars have also opened including Dinosaur Bar-B-Que in 2012. On Halsey Street, numerous new projects a new Prudential tower (opened in 2015), as well as a full renovation of Hanhe & Co building to a market-based apartment building and several commercial spaces below (including a Wholes Food). In 2012, the city of Newark completed the Newark Riverfront Park, the first time Newark residents have ever had public access to the Passaic River. In 2019 Mulberry Commons was opened, a 22-acres near Prudential Center that has been used as surface parking lot for many years and intended to encourage additional development around it.

The streets in Newark have seen less change. The roadways on occasion will sport a bike lane but there is no continues road between Penn Station and Military Park for example. An extensive system of highways and traffic lights efficiently moves private cars and their drivers across Newark. Pedestrians space is limited and still mostly exists as it did in the 1970s with only a few additional road marking and traffic singles.

Rothstein, R. (2018). The color of law : a forgotten history of how our government segregated America.

Tuttle, B. R. (2009). How Newark became Newark: The rise, fall and rebeirth of an American city. New Brunswich, New Jersey, and London, Rivergate books and imprint of Rutgers University Press.